Opening of the Office of Refugee and Immigrant Affairs 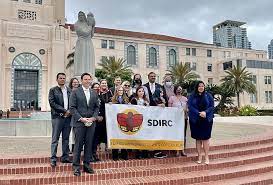 On June 7th, the County of San Diego Supervisors Nathan Fletcher and Nora Vargas presented their proposal for the Office of Immigrant and Refugee Affairs at a press conference held at the County Administration Building. The SDRCC was among several supporters of the proposal. Executive Director for the Karen Organization of San Diego Nao Kabashima spoke at the press conference in support of the proposal, highlighting the need for an office in San Diego.

The mission of the OIRA is to provide resources and information to refugees and immigrants who are new arrivals to San Diego County with the goal of connecting individuals and families to local service providers. The office will be managed by the County Refugee Coordinator. This office will be an important asset to the County and the work we do, especially considering the diversity of San Diego’s refugee and immigrant communities.

During the press conference, Supervisor Fletcher stated: “We are creating a framework for our future that ensures San Diego County is welcoming and everyone feels like they belong.”

Supervisor Vargas also spoke at the press conference: “As the first immigrant elected to the San Diego County Board of Supervisors it is an honor to champion an initiative so personal to me,” Vargas also stated, “To fulfill our vision of creating stronger and healthier communities, the Office of Immigrant and Refugee Affairs will work for everyone by creating a central hub of services and resources and uplift the positive contributions that our immigrant and refugee communities have on our economy and culture.”